The popular excursion and hiking destination “Kings Canyon” is part of the Australian Watarrka National Park in the Northern Territory. Located about 245 kilometers southwest of Alice Springs in the Amadeus Basin and framed by the mighty Macdonell mountain range in the northeast and the salty Amadeus Lake in the southwest, the impressive dry valley is located in the transition area between three different large landscapes. The habitats of mountains, semi-deserts and deserts as well as hill countries are united in a relatively small area in Kings Canyon, which has resulted in a unique flora and fauna in this region. But above all with its special geological appearance of imposing, up to 100 m high and colorful rock walls in various red.

Two different types of sandstone shape the geological subsurface of the region around Kings Canyon. For millions of years, wind and water have eroded deep crevices in the upper layer of the very resistant Mereenie sandstone. When the underlying, more easily eroded Carmichael sandstone was reached, the erosion also broadened and undermined the upper Mereenie sandstone, so that it gradually collapsed and the present broad dry valley of Kings Canyon was formed. But wind and water have also carved out extraordinary rock formations from the sandstone, which have a high spiritual value for the Aboriginal tribe of the Luritja, who live in the land around the Kings Canyon.

The Kings Creek, which sometimes carries water in winter during the rainy season, and the high rock walls ensure a damp and cool microclimate in the gorge, so that extensive eucalyptus forests, peppered with cycads and desert oaks, have settled. The continuously water-bearing water hole in the dry valley also attracts various species of animals, including, for example, budgerigars, the kingfisher or the rock kangaroo. This Kings Canyon, also known as the “Valley of Eden” due to its rich flora and fauna in relation to the barren outback, is best experienced by tourists on trips or study trips on one of the three hiking trails of different lengths through the impressive landscape. 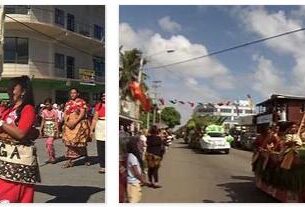 Festivals and Eating in Tonga